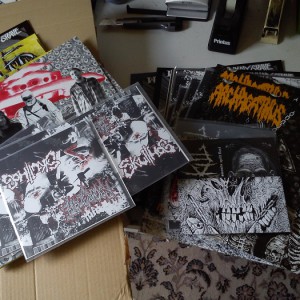 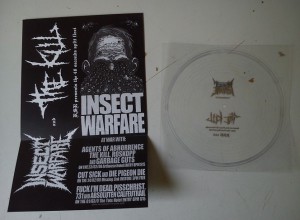 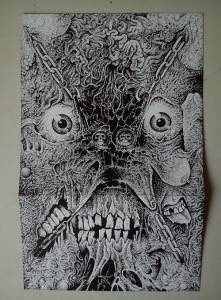 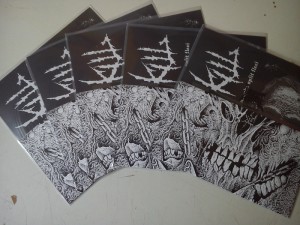 originally released on Torture Garden as limited 100 tape. this masterpiece its now first time on vinyl, 48 seconds of total blasting Grindcore from US and Australia. Insect Warfare is presenting 17 seconds of blastbeat, The Kill is answering with 31 seconds. Limited release, grab your copy before its gone. Original Artwork by Daniel Shaw. 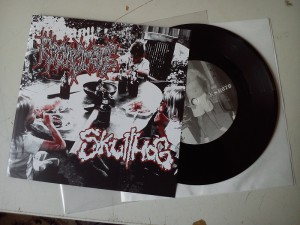 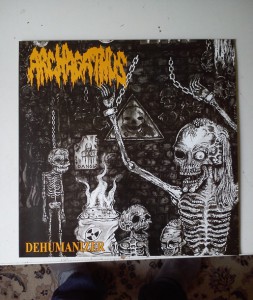 Shift yo ass Agathocles, your space in my playlist and record shelves is detracting me from the one true mince god: Archagathus. Here is the long overdue full length; Dehumanizer, contained in this bloated grotesquery of punk is 21 minutes of the meanest mince slop, gutter riffs and choleric vocals; this sewer of music overpopulated by perversion, sonic torture and other horrors. Pathologically speaking Dehumanizer is the apex of the current mince-gore progression/regression/corruption Archagathus have been undergoing lately and as such Dehumanizer and the last half a dozen splits or so all bring strong parallels to kinsmen and split partners Grotesque Organ Defilement and Hypermesis, but most importantly the band have still ultimately kept their classic archagathus sense of identity/idiocy. 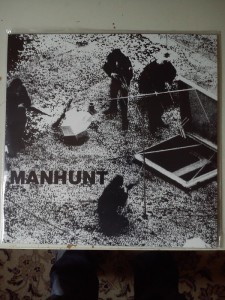 MANHUNT are back to fuck you up and get even. 14 tracks of hate-filled dirge at velocities that approach the absurd, clocking in at just 17 minutes. A long attention span is not required but a new pair of undies and pre-whitened knuckles may be. Fans of the bands 7” ‘Human Detritus’ and split 7” with Melbourne grinders INTERNAL ROT need look no further for another consistent taste of the band’s wares, but those interested in a heavier, more considered dose of power may find a new favourite. 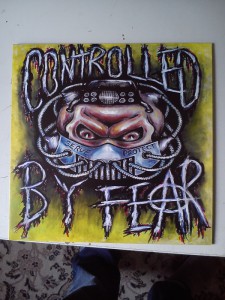 C.B.F. (Controlled By Fear – (pre-RUPTURE) formed in late 1988, with Andrew (Gus Chamber) on vocals, Matt (Stumblefuck) on guitar, Neal on bass, and Matt on drums. The band lasted barely more than a year but played many gigs in Perth, Western Australia, and were headlining shows towards the end of their short-lived career. Talentless amateur young punk musicians, ages from 16 to 20, influenced by all sorts of bands from Doom to G-Anx to Conflict to Fear Of God (whose song they stole their band name from), their musicianship improved over the months and they began to veer off in their own musical directions. Neal went on to play in Cuchulainn Powerhead, Matt went on to drum in Fat Lip & Nailed Down, and Gus & Stumblefuck went on to form Rupture at the very end of 1989. But C.B.F. was where it all started, 25 years ago, at a time when grindy/crusty hardcore was just emerging in Perth. Pestilence (with Kim on guitar, later to form Nailed Down) was perhaps the first band that brought that style of punk to Perth. But Perth has a long legacy of punk, right back to ’76/’77 with the excellent Geeks and Cheap Nasties. Where Controlled By Fear fits in to this vibrant colourful lineage, who knows, but they were certainly a hard-working (albeit drunk & stoned) underground band in Perth in ’88/’89. Fond but blurry memories for the surviving band members. R.I.P. Andrew/Gus.
On a sidenote, on the day this was recorded, an actual professional studio had been booked, but that morning the engineer called up and said some renovations were still going on & he had to cancel. So the band booked a rehearsal room, hired a 4-track, bought a load of beers & pot & recorded themselves (with the help of a friend). This LP contains this entire unreleased demo recording (remastered decades later at Stumblefuck’s “Hundskit Studio”), plus 2 live songs that for some reason were mangled on the demo. So in that respect it is completist C.B.F. The only songs missing are 3 covers, “Multinationals” by Doom, “Cold War” by Siege, & “Lowlife” by Cryptic Slaughter, all of which were always performed unhindered by any talent whatsoever. Also 2 songs that were performed live but never captured in any recording – “Woodrow’s Dead & I’m So Fucking Sad” (about Simon Townsend’s dog who jumped out of a helicopter & died), and “I Wanna Be A Thrombus Groupie” (sung to the tune of “Anarchy In The UK”, and dedicated to fellow Perth punk band Thrombus).” 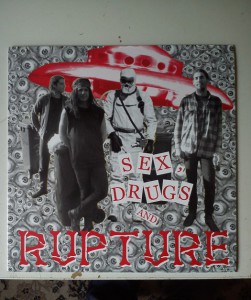 Nihilistic, dirty, brutal and fast material from the apes from land down under. Don’t miss this masterpiece of the “Hate City” Bourbon Crew. Better fasten your seat belts while listening carefully to this 29 tracks of full on raging, unadulterated and just straightforward fast attack in excellent sound quality 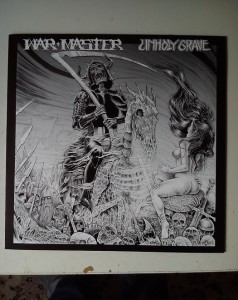 War Master taking their name from a Bolt Thrower song, the band might be expected to sound like that but the truth is more nuanced. These 2 new tracks of War Master drop back from their smoothly integrated style for a rougher, catchier and more swedish death metal version of their sound. War Master also rely heavily on the bounding riffs of the first couple Entombed and Grave releases, producing an urgent and jubilantly violent sound. On the flipside japanese Unholy Grave who ever true to form blurt out their logic defying twirls of old-school Grindcore entertainment in complete excess: their standard madman howls, riveting angular riffs and tremoring blasts, all lifted straight from a rehearsal recording giving in that coarse edge the band.

HARDCORE/POWER-VIOLENCE. Australia’s foremost power-violence export, EXTORTION, return with 11 tracks. This time a split with the long running and long overlooked COLD WORLD from Austria (not to be confused with the tough guy band). Both bands play full on raging hardcore. The focus on COLD WORLD’s side lies on their ’80s highspeed hardcore-roots (the 3 members having played in Austria’s premier band EXTREM). However the band is proudly still breaking every rule of the punk police, even if this means another 25 years in blastbeat obscurity away from any d-Beat, noise-punk or whatever-hype that just happens to be the retro flavor of the moment. Just fucking fast hardcore!